The Top 15 Universities with the Highest Average GPAs

Do these schools deserve their top spots?

Read our 2019 ranking of the Top 20 Universities with the Highest Average GPAs here and the average GPAs of every Ivy League university here.

Between pulling all-nighters and skipping class to finish an assignment for another class, college students will do anything to keep up their GPA. However, with grade inflation recognized as a prevalent issue in higher education, not all GPAs are created equal. Grade inflation occurs when institutions award students with higher grades than they might deserve, increasing the overall average grade received. While this may result in seemingly more qualified students, it can make it harder to distinguish between two candidates with 4.0s, as well as fairly compare candidates from schools with known grade inflation versus schools without.

In our 2018 analysis of thousands of student profiles on our platform (which include self-reported GPAs), RippleMatch found that Ivy League schools rank as the worst offenders of grade inflation, with some of the average student GPAs falling in the A / A- range. While there’s no denying that students at these institutions work hard, it’s worth questioning how much these averages are skewed through grade inflation, and if it’s fair to compare a 3.7 from Brown University to a 3.7 from Baylor University. 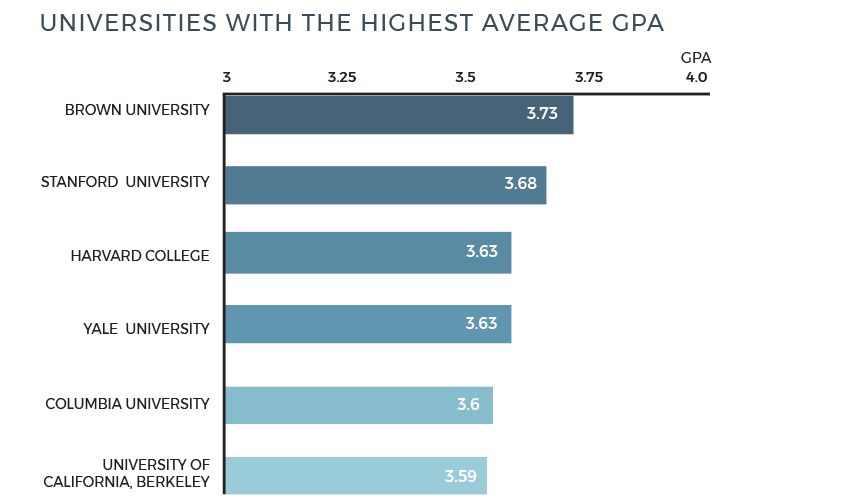 Brown University came out on top with an average GPA of 3.73. Interestingly, the Brown grading system doesn’t record failing grades, and there’s no such thing as a D. The school also doesn’t record any pluses or minuses, so the only grading options are an A, B, or C. Students not interested in letter grades can choose to take a class on a Satisfactory/No Credit basis.

Brown might have the highest GPA on paper, but their No. 1 spot is likely due to their extreme grade inflation.

Stanford has a pretty standard grading system, but also gives students the chance to receive above a 4.0 if they receive an A+ in a class. At 3.68, the average GPA of Stanford students is high, hovering around a solid A-.

These two Ivy Leagues are tied for third place with a 3.63 average GPA, coming in right behind Stanford University. Unlike Stanford, neither Harvard or Yale University offer A+ grades to students and stick to the 4.0 grading scale. Yale cracked down on overly-generous grading after a 2013 report found that some departments mainly awarded A’s and A-’s, which was “close to having no grading at all.”

Harvard had a similar problem with grade inflation, with its former Dean of Undergraduate Education Jay M. Harris revealing that the median grade at Harvard was an A-, while the most frequently awarded grade was an A. While both colleges have recognized their problems with grade inflation, their shared third place spot begs the question if any improvements were made.

Another Ivy League takes the fifth spot with an average 3.6 GPA. Columbia University uses a standard A-F grading scale for most of their individual colleges, but those students can also receive an A+, boosting their GPA above a 4.0. Additionally, many of their graduate or professional schools such as the American Language Program, the School of Architecture, Planning and Preservation, the School of the Arts, the Business School, the School of Journalism, the Medical School, and the Psychoanalytic Training Program, are excluded from the standard grading system, opting for alternate scales such as pass/fail.

Breaking from the Ivy League domination, this UC system school is right below Columbia University with its 3.59 average. UC Berkeley grades on a standard grading system, and does offer A+ grades, but no extra points. Additionally, the UC Berkeley student newspaper, The Daily Californian, has spoken about Berkeley grade deflation, pointing out that the university typically awards lower grades than the Ivy League institutions on this list.

While GPA can be a great indicator of a student’s work ethic and skill, grade inflation complicates its ability to serve as an objective tool for assessing a candidate. Notably absent from this list are top schools like MIT and flagship state schools such as Penn State and University of Wisconsin – Madison, all of which had much lower average GPAs. Check out the list of the top 15 schools with the highest average GPAs below, and request a demo here if you’re a recruiter interested in connecting with early-career candidates from these top universities.

Are you a student looking for awesome entry-level jobs and internships? Sign up for a RippleMatch account here and get matched with exciting opportunities from top companies. 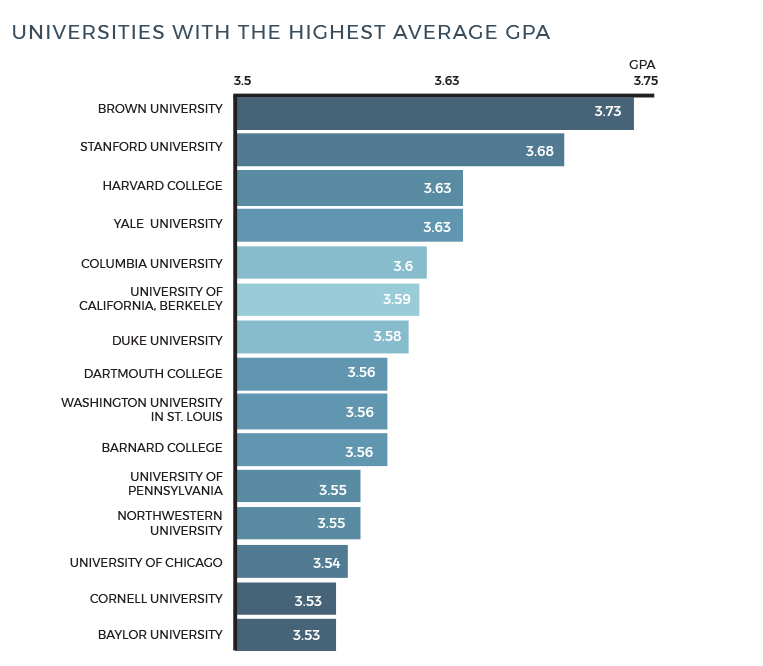